Photos from the Unity Ride

As has become traditional, dawn broke on the Unity Ride to the sound of rainfall. After a bit of armtwisting and the loan of my waterproofs, my pillion agreed to be undeterred by the thought of a swift London soaking and consented to make the trip round the North Circular to the Excel car park. Unlike Kill Spills, I didn’t see many other bikes on the way and thought, maybe it will be a wash-out – but London bikers are made of sterner stuff and the East Car Park was full of slightly soggy riders, and Pudsey Bear.

The organisers had put together a great route kicking off with the Dome, past Monument, a quick lap of Parliament Square and back up the Strand to St Paul’s and Tower Bridge. This is a large part of my usual London beat but it is so much better when accompanied by a large number of the Met’s finest keeping over-assertive car drivers under control!

Lots of waving from the pavements, and lots of mobile phones being held up to capture the event – makes me wonder what the tourists will say when they get home. Maybe they will describe London as a city of bikers. Would be nice if it were true! (and maybe a few more of the potholes would get filled in.) 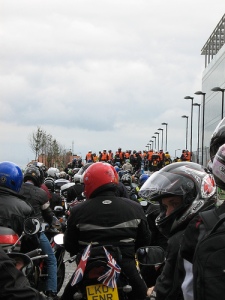 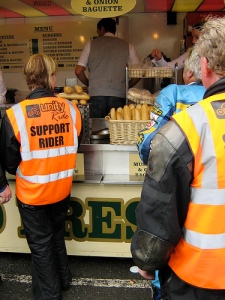 Signed up for The Unity Ride

I missed the first Unity Ride, which ran in the wake of the London bombings, so I’m looking forward to Unity Ride II, running through the capital on 19 August. There’s been some debate about whether a second ride is needed, but the organisers describe it as “a Charity event that celebrates motorbiking. Staged for ‘Children in Need’ and ‘Help a London Child’ and supported by the London Met Police & the Unity Support Riders, together we will visit all the major sights of London.” which sounds good enough for me.