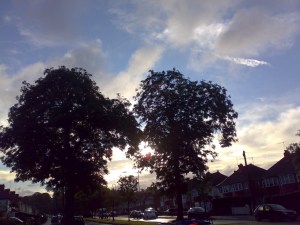 I am waiting for Graham and Paul. Some fairly extensive security arrangements require me to be first out. That's what they're telling me, anyway. The forecast is gloomy but the sky is blue. It will be good to be riding again, because there's a voice in my head saying “how come you never take me to the airport any more” and it needs to go away. 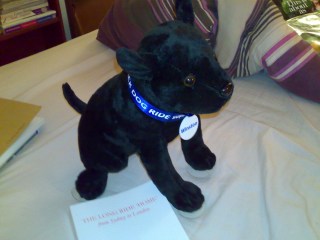 This is Winston. He’s the mascot for the Black Dog Ride, a fabulous Aussie initiative bringing bikers together against depression. There does seem to be a big overlap between bikers and people who suffer mental illness – though I don’t know whether that’s because bikers are more vulnerable to depression, or whether we’re just more willing to talk about it because we know our community won’t judge us.

I was hoping to take Winston with me as my passenger on this year’s Old Farts Tour of Scotland, which takes in the Scottish RBR Landmarks as well as sufficient checkpoints to qualify for a Touring Award in the Scottish National Rally – but he’s rather bigger than I thought he was going to be. That’s Nathan Millward‘s book in the photo for scale. Far from being pocket-sized, Winston is in fact about three-quarters of a Jack Russell.

Like the supersonic sausage dog of legend, he does indeed have rubber suckers on his feet, but I don’t dare stick him to 2Moos’s screen for fear he will have my knee off when he comes loose.

So Winston will have to stay at home and guard the house while 2Moos and I go off and play. In preparation I have changed his air filter and his oil, though not his oil filter because I don’t want to find at this late stage that I can’t get the bash plate back on with the bike on the side stand. I shall continue reading Mr Honda’s “Common Service Manual” to see whether he has any advice on this. And in the meantime, we are off back to the top of Scotland. Though not, this time, in search of Vikings.