How to win friends and influence people

My dad used to have a special gift. (He may still have it but it’s a long time since we’ve been shopping together). He could walk into a shop that was so empty that the goods would be dusted to a shine and lined up not only by name, but also by size and colour, and within ten minutes the place would be rammed. (He also had the gift of arriving at the chip shop just as they ran out of chips, but that’s a side issue).

I appear to have the same talent with motorcycle parking. When I started parking here Ruby had the entire bay to herself bar a 125cc Japanese cruiser that appeared to be entirely ornamental judging by the pile of blossoms drifting around the wheels.

Now I have to squeeze in between an array of exotica including a Goldwing and, today, a rather nice Ducati with French plates.

The box on the back is my tipi, which is going back to the importers so they can help me work out why it leaks in the rain. Some people might think this was over-ambitious to strap on the back of a bike, but I have taken lessons from Kevin Ash who once carried a fish tank on the back of his GS. He wasn’t specific about whether it had fish in at the time.

This is a photo of my own special crime from the Cambridgeshire County Council parking enforcement website.
I’m very sorry. But it’s nearly a motorcycle and it was very very wet, so there weren’t very many bikers wanting the rest of the space. And I was late for the Senna movie. But I’m still very sorry and I’m glad I didn’t meet any of the militant parking enforcers they used to write about on cix who used to take wheels off cars until they were reduced to the appropriate number for the parking space in question. 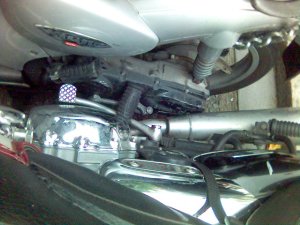 My bike is still traumatised after apparently being mounted by this scooter in an excess of parking exuberance.

This is the first time I’ve tried on-street parking in London, it makes me anxious becuase I don’t like people touching the bike and scooterists seem to see nothing wrong in shuffling everyone else’s bike along so they can ram their plastic rockets in a few inches further.

But the ride in and out was good fun and crossing Waterloo Bridge always makes me happy – Gherkin on one side, Houses of Parliament on the other.

Tagged as parking, scooters, too close for comfort

The MCIA reports that bike sales are up 10 per cent overall, and up 16% growth in the sub-125cc market.

One of these modes of transport needs more parking space!

And no, we don’t want to pay a pound for it!