Skating away, on the thin ice of a new day

Two excellent days this week, and it’s not even Friday yet! I am shortly to rejoin the ranks of the gainfully employed (subject to passing some security checks, which makes me nervous even though I have no reason to be. A bit like walking past coppers carrying guns in Oxford Street) so am trying to make the most of my last few days of leisure.

On Tuesday the chance came up to go to the High Court (even typing that makes me nervous!) to see the second day of the appeal brought by No To Bike Parking Tax against Westminster City Council. I’m a latecomer to the campaign, because I worked for a body that didn’t want to get involved, though two of my absolutely favourite people in the lobby back it and that’s good enough for me. The veterans gathering on The Strand in cool hi-viz (a sentence you won’t normally see me type) would have had every right to tell me to sod off. But they didn’t, because they are bikers. They said, hello, and what do you ride, and we like your camera, and told me about freemasonry. And then they gave me stickers, and a seat in the court. I made myself useful by helping add up the length of bike parking provided in the borough, which helped the NTPBT QC point out that Westminster plan on the basis of 8 bikes in a bay, or 0.73m per bike. That’s about one of Ruby’s panniers.

People who think they know like to say that bikers aren’t political. I think Warren and the campaign have soundly disproved that. And they’ve done some incredibly creative stuff – I absolutely loved their V-for-Vendetta themed action.

Peaceful protest at its finest.

Today I have been polishing the Triumph. Those of you who know my previous position on bike cleaning may be wondering what has happened to the real Highwaylass and how to get her back from Guantanamo Bay. Orange really isn’t my colour. But the Triumph is up for its MOT and I’m thinking this year is going to be a bit of a retro riding year, for which shininess is a must. Am I sounding convincing? Actually I just don’t want Caz to tell me off again for having rusty spokes.

And while I was in the garage, cup of tea and headphones to hand, taking life one spoke at a time with rubber gloves and metal polish and wire wool, I thought that I wouldn’t have been able to do either of these things if I’d had to negotiate my time with someone else. There are downsides to being single. I have to make my own cups of tea, for starters. And I do miss having a warm body to fall asleep on on the sofa. But the quid pro quo is that if I fancy spending my evening on my knees in the garage eliminating that last speck of rust from my rims, rather than sitting in domestic bliss on that sofa, that’s absolutely fine. When I am an old woman I shall wear hi-viz, and a jacket that doesn’t go. And I shall spend my pension on petrol and summer gloves and Altberg boots, and say we’ve no money for jam.

No To Bike Parking Tax 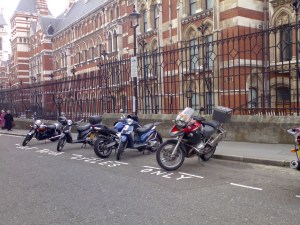 Ruby wanted to come to the Old Bailey to offer moral support.

Tagged as no to bike parking tax

Which half of Robert Plant should I be?

This week I have been mostly riding the Africa Twin and trying to remember which position means the choke is in (or is it out when it’s making the engine run richer? I have forgotten…) I also need to learn where the fuel tap is so that I can do the in-flight changeover from ON to RESERVE – if only to avoid the embarrasment of rolling to a halt at the side of the road right in front of the 2 cars I’ve just stylishly overtaken while scrabbling fruitlessly below my left thigh.

The Twin is much lighter than Ruby, and while I’m not really enjoying the Givi boxes – what is the point of a box that flaps totally open in the vertical plane when you open it and dumps your knickers on the tarmac? – this can be cured for £300 with a rack from Metal Mule which would let me transfer my boxes from Ruby. Otherwise we are very happy together.

I wanted to take him on the No To Bike Parking Tax M25 run today but I am knackered and broke, so I am there in spirit and following their progress on Twitter. Which isn’t half as much fun, in truth. But it has saved me about 50 quid towards the cost of my new house. Only 74,950 to go.

This week has also been occupied with trying to learn the harp intro to When the Levee Breaks – I have been invited to try out for a Led Zeppelin tribute band, presumably as half of Robert Plant (ironic given that in reality I would make at least 2 of him). Which meant I was the person sitting on the train muttering “one – and – two – and – three – and – four” and making unintelligble notes that everyone crosses the aisle to avoid.

Tagged as no to bike parking tax