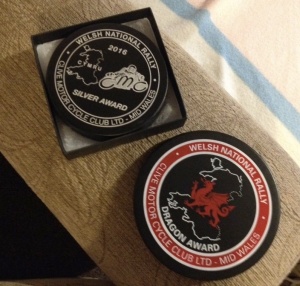 It seemed a bit harsh. The bloke in the blue car who’d chased me down the M6 and wound down his window to deliver his verdict hardly knew me. I didn’t think I’d done anything particularly idiotic – changed lanes, discovered the  one I was in was about to dump me off the motorway into darkest Birmingham, changed back. Maybe he was fulfilling the role of Caesar’s slave, because frankly I was feeling pretty immortal.

There are few things as good as driving a car that was a basket-case when you first got it, hearing its barbaric yawp from the engine that you rebuilt,  and knowing that you and your doggy sidekick have got three more days of road trip ahead – and a weather forecast promising lots and lots of sun, which is unusual for the Welsh National Rally.

As already noted, this was my first solo run – though it isn’t ever really a solo run, not even a little bit. Steve and Jim, the Twins-soon-to-be-separated-by-a-CrossRunner were at the bunkhouse already, so Thursday night was fish and chips and a pot of tea. On Friday they were off towards St Davids, while AdventureDog and I were heading down the border towards Hereford and then heading into the mountains for what should have been a five-landmark day. The satnav foiled this plan by deciding, after I missed my turn to a landmark in the valleys, to shrug its electronic shoulders and decide we had been close enough, no need to tell me. Well done for trying. I didn’t notice for another half an hour. Bloody annoying but a good lesson for the Rally – always go point-to-point, don’t trust the technology! And the consolation prize was a drive down an amazing twisty road across a miniature moorland which I had no idea existed in this former mining heartland – stunning views interrupted by the occasional heart attack when a local came bombing round the hairpins not expecting to find a small blue roller skate in the middle of the road. 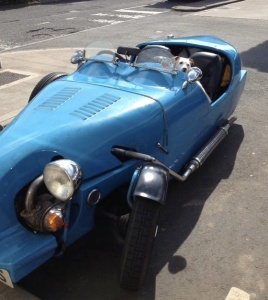 Salt was rubbed firmly into the wound when I got back to the bunkhouse and the Twins pointed out that the back road from my final landmark to the one I dropped for lack of time was about 10 miles up a goat track, not the 40 mile detour that the Garmin wanted me to take.  It has turned into some sort of nanny, making its own decisions for me. ‘Not that way, dear, it’s not safe for you.’ It needs a telling!

On Friday evening the rest of Team RBR turned up – JD, and the Bell brothers, standing in for dad. Maps were checked – my tatty paper Wales Touring maps from my first RBR in 2003, Jim’s laminated A4 cards with route info and a photo of each target, the Bells with an amazingly detailed plan of attack and a GoPro.

We set off on Saturday morning. I got lost trying to find the petrol station, which wasn’t the best of starts, but it did mean my arrival at Castle Caerinion was perfectly timed to get my card stamped and get going.

I wanted a Dragon this year – I had worked out that to do the extra four locations added only 40 miles or so to the route, the sun was shining, and I would never have such a good chance again. But time gets away from you so quickly. This may have been because I spent the first half of the rally going up the goat tracks just for the entertainment value. On my second road I rounded a bend to find a BMW pilot covered in mud from knees to neck and his partner helping him fetch the bike out of the hedge. ‘It gets worse,’ they said. ‘You’ll be OK though.’ And it’s true – roads I wouldn’t dare on the Triumph are a breeze on three wheels. Shakey looked a bit alarmed when we headed sideways in a three-wheel drift towards the fence but it ended well.

At 4pm we were still somewhere the wrong side of Machynlleth. But there was only one WNR location and one Dragon left and the sun was still shining .We pulled in to Dinas Mawddwy, which sounds like one of P Diddy’s aliases, to be greeted by thumbs up and cheering from a group of blokes outside the pub. Cool. I stopped 200 yards further down the road to dive into the ladies. Not so cool. But they did give me directions to the Merion Mill, and that was my silver in the bag. The miles to the last reservoir were some of the best of the rally – empty roads, late afternoon sunshine, a happy dog under blue skies – perfection. And then the last miles back to Castle Caerinion were under a biblical thunderstorm with thunderbolts, lightning and torrential rain. Still, if you are gong to be soaked, far better to be soaked at the end when you can gain bragging rights but go home to dry out!

Standout memories of the day? A big cheery wave from JD who was heading south while I was heading north to the Dinas Dinlle airport. No, it’s not a Morgan. Finally escaping the 20-mph sightseers and powering round the sweeping curves of Snowdonia to see the granite soaring skywards. Incredibly polite Americans asking what on earth I was driving. A much-needed Mars Bar in the Co-Op car park. And my fabulous new coaster! Same again next year?

I have dropped out of the habit of blogging and a pedlar of mystic herbal cures has moved into my vacated URL at Blogger. It could have been worse. I hope that people who search for a blog about motorcycles and three-legged dogs realise that isn’t me – but because I am not posting, I am slipping down the ranks of Popular Search Engines.

This is the rather selfish motive for joining in with #28daysofwriting.

There are other reasons. I had huge fun with my challenge to post every day about my Australian adventure, but that was three years ago and those laurels are getting rather crumpled.  I have moved house and changed jobs, and these things have bumped writing out of my routine.

For three months I was technically homeless. I had places to stay. Some were scary, some had wheels, some were lovely. But it takes an immense amount of psychic energy to remain positive in the face of living out of a suitcase and borrowing other peoples’ washing machines. I was very lucky, I knew that there was a new home in my very near future and all I had to do was hang on. I have learnt humility. I have been guilty of being one of those people who wonder why ‘the poor’ can’t cook healthy and cheap meals. Now I know. In a shared kitchen other people help themselves to the plates you have washed up *while you are standing in the kitchen about to serve up onto them.* Of course you can’t lovingly slow-cook a cheap joint of meat and create a variety of healthy broths and stews.  The Chinese postgrad in the conservatory will come out and nab it off your serving spoon.  Or the cat will be sick into it.

I am home now. The house and I are getting to know each other. Shakey is mapping out the neighbourhood in ever-increasing circles when we go on our twice-daily walks.   The Lomax needs a new battery and to have the plaster dust washed off, but once that is done we should be ready for adventure. Which will give me more to write about than self-pity and stress.

I have bread* and I have wine

It has been an interesting 2 months. Shakey and I have lived in a caravan on the front drive of a house full of slightly odd but generally kind people; we got promoted to live indoors, but the downside of that was that the room was about 6 feet by 4 feet and we got rather claustrophobic. We went on a winter tour of the UK in a borrowed de-luxe motorhome – what a shame to give that one back! – we nearly moved in with a landlord who sees dead people, but got cold feet and decided that it would be better that the dead were left in peace. We lived with friends in the newly-proclaimed Caliphate of Birmingham; we lived in another caravan, one that had electricity and running water this time, and now we are living in our new house, except that we will have to move out again next week to let the sparkies in to rewire it.  The bike is here, Hortense is here and next week the Lomax will be here. All is well.

*pizza, to be precise.