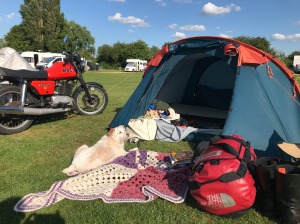 There’s one!
Nope.
But it’s got feathers, and a beak, and bony feet.
Nope. Still not counting it.
But….it’s saying ‘cluck’ and laying an egg.
I said no. We’re not counting chickens. Not yet.

There is a well-worn internet quote about madness being found in doing the same thing and expecting a different outcome. Thursday saw me doing the same things as I had the day I set out for Wainfleet and got brought home on a truck. Tent, Trangia and wash kit behind the seat. Clothes, food, and Wanted on Voyage in the nose. Sleeping bag lashed to the seat with my trust Helen2Wheels straps. Wingman in the chair, in his harness, singing his kickstart song which might be excitement or might be distress, it’s rather hard to tell.

We were heading for SALT 13, on the flat bits of the East coast the far side of Ipswich. But that was rather a long way away and we weren’t starting till the afternoon, as domestic chores like getting the 2CV her MOT and having a dispute with the neighbours about the position of their new fence posts delayed departure. So the first goal was a short hop to Cambridge, where there’s a rather nice camp site on the edge of the city centre, where we could pause and take stock.

It rained a bit. We voyaged cheerfully through the centre of Northampton, decided not to bother with Bedford, and nipped up a tiny bit of the M11 to reach Shelford. The outfit seemed to be shaking its head more than normal until I realised that it was just the headlight swaying to the beat of its own private drummer. Quick pause for tightening of nuts, then onto the trim green grass. Was that a faint cluck in the distance?

80 miles is no distance at all really – the man who brought me my first bike was found of saying “I could piss further than that” – but adventures don’t have to be huge to be significant. Barring the headlight, nothing fell off, the oil stayed where it was supposed to and the sun (mostly) shone. My back really hurt, though. Which is strange because I count myself fairly fit at the moment – I cycle 12 miles a day, which has given me thighs you could crack concrete on. But I’m not bike fit, and I was glad to call it a day.

One of the best things about the Cambridge Club Site is its book exchange. It’s Cambridge, so finding a book on the Bader Meinhof gang on the shelf shoudn’t come as a surprise. I nabbed that, and three others – a late Stephanie Plum novel by Janet Evanovich (don’t bother, she’s just phoning them in now); a children’s book by Eva Ibbotson which had an intrepid governess and a happy ending; and Bill Bryson’s latest which seems to have jumped the grumpy old man shark – got the tent up and settled back with a beer.

How to explain SALT? It’s a slightly tongue-in-cheek homage to the Cold War and the cars that came from it. There’s touring, there’s behind-the-scenes visits to Cold War sites, and there is feasting. I first heard about it when I owned the QEK, attended with Scabbers of mixed memory, and then missed the next two, one because I’d migrated to Scotland and my manager liked to play silly buggers with my leave, and the next because I’d migrated back from Scotland and my friend who came to help with the boxes wanted to stay the whole week and I felt unable to say “thanks, love – now off you fuck so I can go and drive two strokes.”

So this year had a sense of unfinished business and also the opportunity for MZ adventure. Though in the end the weather was so dreadful that I spent all of Saturday riding in the back of an army truck. It was a novel experience, by turns cold, wet, bumpy and with an underlying buzz from the exhaust fumes, but it was still better than letting the Wingman get soaked in the apocalyptic downpour. The SALT Tourists spent three hours in the rain admiring the nuclear bomb stores of Thetford Forest. I sat in the truck reading Smiley’s People, which was nearly the same, before they let me out for a pub lunch in the dry.

The reward for a soggy Saturday was a glorious sunny Sunday – perfect conditions to tackle the 160 miles home. AdventureDog got lots of cuddles from the owners of the caravan next to us at Moat Farm Campsite and we set out bravely.

There are things you need to find out when you are taking a new vehicle on tour. How often do you need to fill the tank up being one of the important ones. (About every 120 miles, is the answer. 10 miles a litre, same as the 2CV.) How hard can you push it before the engine seizes up is another.

This was my biggest worry. The Jawa-of-disgrace would run at 45mph for 15 minutes or so before overheating and abruptly losing power. I’d spent most of Friday waiting for that slightly sickening feeling, and keeping tabs on places we could pull in to recover – but it never came. So on Sunday we horsed on a bit, because I realised I could make it back in time for our local MZ meet if I didn’t hang about, and the bike was perfectly happy to run at 50. That’s a magic number because it’s just about fast enough to run safely on the dual carriageways, especially if road works are involved.

And if we can do 160 miles in about 4 hours, then there’s a whole lot of England we can get to in a weekend.

There’s an undeveloped metaphor in here but it is late and there are enough words already. The kit was the same but the bike underneath it was different. Change is, after all, possible.