“Thank you for talking to me.”

I have been trying to track down an exhaust leak on Hortense for about the last 2 years. I know she is blowing, because I can hear it, smell it, and she was about 20mph down on where she should be. Which is a big loss from 70mph.But could I find it ? Hell no. 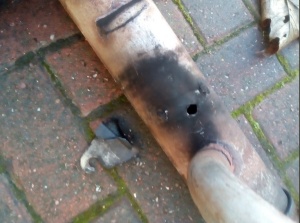 The hole is between the exhaust and the gearbox, where the bracket that holds it on has torn off.  She has been away at a spa getting a new manifold and the chap doing the work said that he had found the hole and I needed a new one. He may have sounded slightly disappointed when I told him thanks but  could do that myself.

When I say, could do that myself, I recall it taking me a day and a half and much trauma. So I have been putting it off, but today dawned (eventually) bright and sunny and there was really no more excuse not to.

Except the nice old boys who kept stopping for a chat. Obviously I look at my most attractive in my official Scottish rugby beanie, two pairs of trousers and three jumpers. So I think it may be curiousity value. “Where’s the motorbike gone?” asked first Cheery Old Cove, walking his Extremely Fluffy dog. We had a quality chat about 2-strokes and the defection of Ernst Degner, which I know about thanks to Mat Oxley’s excellent book, and he told me about his collection of BSAs before the dog decided it was time to move on.

The second old chap had a rather stylish fair isle hat and a rucksack. It is possible he was a rather off-track rambler, but I think he may just have been a little lonely. We discussed the benefits of owning an older car compared to a modern one, how much fun it was to work on your own vehicles, and then he said, rather sadly “Thank you for talking to me” before heading on up the road.

This time, 6 years later, the new box went on in 45 minutes. And bloody hell, does it make a difference!